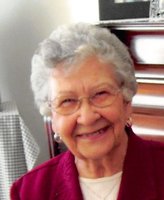 Peacefully on Thursday, February 21st, 2019 at Craigwiel Gardens; Georgina Elizabeth “Beth” Wiseman passed away in her 100th year. Beloved wife of the late Colin Wiseman (1984). Youngest daughter of the late Robert B. Davies and Georgina M. (Clark) Davies of East Williams Township. Loving mother of James D. Wiseman and his wife Debbie of Parkhill and the late J. Clark Wiseman (2018) and his wife Rhonda of Dutch Settlement, Nova Scotia. Loving grandmother of Kevin Wiseman and his wife Julie, Craig Wiseman and his wife Amy, Leanne Wiseman, and Leah Wiseman. Great-grandmother of Adrienne, Kelly, Ridley and Aidan Wiseman and Addison and Graydon Thibeault. Also survived by many very special nieces and nephews and grand-nieces and nephews. Predeceased by her son Donald (1958); sisters and their husbands, Margaret and Fred Guilfoyle; Nora and Andrew Ross; brothers and their wives John Davies and Ethel and Lloyd Davies and Elsie. The family would like to express a very sincere thank you to the staff of Craigwiel Gardens, Ailsa Craig for the care and compassion shown towards mother. Friends will be received on Monday, February 25th, 2019 from 6-8 p.m. at DENNING’S OF STRATHROY, where the Funeral Service will take place on Tuesday, February 26th, 2019 at 11 a.m. Interment in Nairn Cemetery. As an expression of sympathy, donations to ALS Society of Canada, Canadian Cancer Society or a charity of one’s choice. Condolences and donations may be left at www.ailsacraigfuneralhome.com.