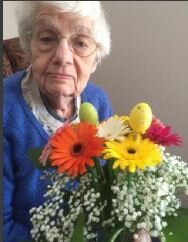 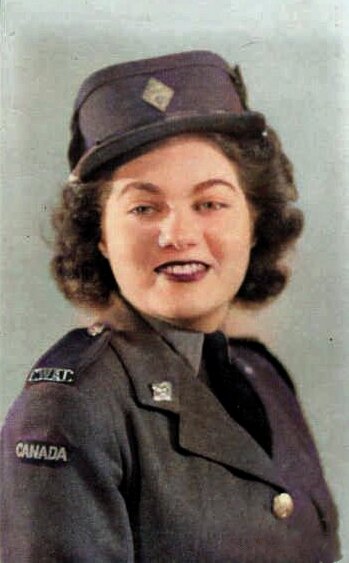 Born in Thamesville, Ontario on March 31, 1923, first-born to Harold and Eveline Harper, she was raised on a farm with her younger siblings, Ray, Glenn and Pat. At age 19 she joined the Canadian Women’s Army Corps during WW2.  While working in the Training Base cafeteria in Kitchener, she met a young soldier named Maurice Harwood during his Basic Training course.  They were married in March 1943 before Maurice was deployed overseas. She would not see him again until 1946.

Marion was a mother, grandmother, great-grandmother and aunt. She lived most of her life in Ailsa Craig with Maurice until he passed away in April 2000 after which she moved to London. Maurice and Marion raised 5 children together.

Surrounded by her children and grandchildren, she peacefully departed this world on February 11, 2022 at age 98 at Kensington Village in London Ontario. She was serenaded to the sounds of Willie Nelson, Johnny Cash, Patsy Cline, Loretta Lynn and some fiddle music that she loved.

Surviving her is Diane Shipway (Jim), David (Muriel), Stan (Meg), Steve (Peggy), and Michael along ten Grandchildren, and six great-grandchildren who all adored her.

The family would like to extend their appreciation to the Nurses and Staff of Kensington Village Long-Term Care for the outstanding care she received while she was a resident there for almost 6 years.

In lieu of flowers, donations can be made in her honour to Quilts of Valour – Canada Society whose mission is to present handmade quilts lovingly made by volunteers in order to provide comfort to ill, injured and retired Canadian Armed Forces Members. (www.quiltsofvalour.ca)

Visitation will be at Denning’s of Ailsa Craig, at 171 Main Street in Ailsa Craig on February 16th at noon, followed by a private Funeral commencing at 1:00pm followed by an interment at Nairn Cemetery.

Please register for visitation through this link: https://signup.com/go/fDWzhpm

As per COVID-19 restrictions, proof of vaccination is required to attend visitation.

Share Your Memory of
Marion
Upload Your Memory View All Memories
Be the first to upload a memory!
Share A Memory